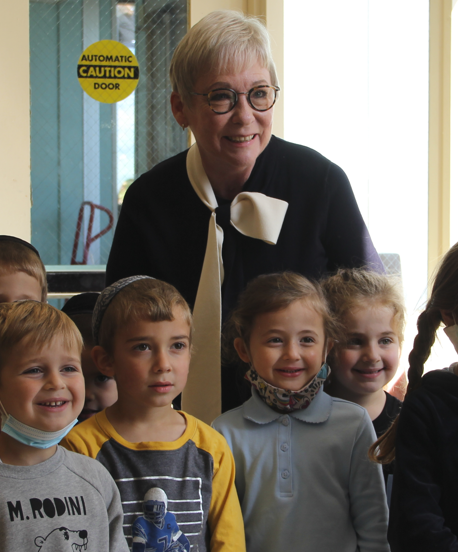 WATERBURY — Carolanne Marquis, executive director of Children’s Educational Opportunity Foundation of Connecticut, expected the Brass City to be a good fit for her organization, but she didn’t expect it to see the immediate success it has had.

Children’s Educational Opportunity, or CEO, provides scholarships to children in grades K-8 from low-income families to attend an accredited private school of their choice, and this is its first year serving Waterbury.

Seventy-nine scholarships worth a total of $165,900 are being provided to children from Waterbury families that qualify financially with an income at or within 200% of federal poverty guidelines. CEO officials originally allocated 43 scholarships worth $90,300.

About 90 city children remain on a waiting list for next year, Marquis said.

CEO, which launched in 1996, also serves families in Bridgeport, New Haven, East Hartford and Hartford. Reaching all towns and cities in the state is the “dream goal”, but serving families that are most challenged in distressed municipalities is the priority, Marquis said.

CEO conducted a demographic study as to what municipality should be the next one to be served before selecting Waterbury this past February. More than 90 city families submitted applications within days after they became available March 1, Marquis said.

“We just felt that Waterbury was the place we had to go,” she said. “We were blown away by it. Parents responded so quickly.”

Each family is receiving one-half tuition up to a maximum of $2,100. They are responsible for paying for the other half, Marquis said.

City families who have received a scholarship have chosen to send their children to Yeshiva K’Tana on Hillside Avenue, Children’s Community School on Wolcott Street, and Catholic Academy of Waterbury on Robinwood Road.

Katherin Sniffin has been principal of Children’s Community School since 2017. Students who attend school there are primarily from low-income households in the city. Tuition costs between $4,000 and $5,000.

CEO is funded through individual donations and doesn’t receive governmental assistance, Marquis said. That makes it a challenge to provide scholarships to all families who are seeking one, she said.

To help fund scholarships during the pandemic, CEO officials closed their office in Bridgeport just before COVID-19 entered the state in Mach 2020, Marquis said.

“The temptation this year to fund another 100 to 200 kids and pull from that security we offer families was there, no doubt about it, but we knew we had to be faithful to the investment we were making in the children,” she said.

Andrews founded CEO in Bridgeport after reading an article on an airplane about a philanthropist who was upset about the quality of schools. That sparked the philanthropist to provide matching scholarships for children from low-income families to attend the school of their choice, similar to Andrews’ mission with CEO.

“Everything we are doing here helps the kids, which is great, but it really helps move society forward,” Andrews said. “That’s what I love about it.”

Reprinted with permission. This article originally appeared in the Republican-American.